Karl Stojka was born on 20 April 1931 in Wampersdorf, a small village in Lower Austria. His family belonged to the Lovara, a sub-group of the Roma, who had settled in the region in the 19th century. His parents and grandparents spent the summers as itinerant horse dealers in the countryside. Winters were spent in their houses in the city of Graz and the village of Jois in the province of Burgenland. After the Nazi annexation of Austria in 1938, travelling became increasingly difficult. The family was forced to give up selling horses altogether and moved to a working-class district of Vienna.

In 1940, Karl’s father was arrested by the Gestapo (Secret State Police) and sent to the Dachau concentration camp. From there he was transferred to the concentration camp at Mauthausen, where he died three months later, allegedly of a heart attack. One day in 1941, when Karl and his brother Mongo went to visit their grandparents, who were staying at a traditional Roma site with 200 to 300 other Roma, they found that everyone had been deported. Karl never saw his grandparents again. They were probably sent to the Jewish ghetto at Łódź in Poland via the ‘Lackenbach gypsy camp’. Some time later, their older sister Kathi was also arrested and deported to Lackenbach. 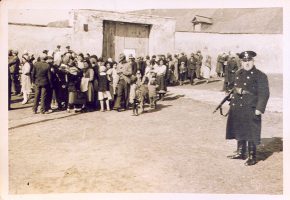 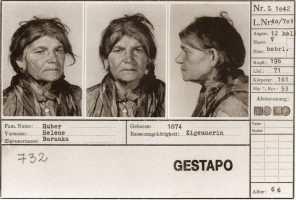 In March 1943, the mass deportation of the remaining Roma and Sinti families to Auschwitz began. Karl was arrested in his classroom on the 3rd of March. Karl: ‘The door opened and in came the caretaker of the school, the headmaster and some men in heavy leather coats: the Gestapo. We all had to jump up and shout “Heil Hitler!” Of course, I joined in, but then they began to whisper with our teacher who suddenly turned to me and said sadly: “Come, Karli Stojka, you have to go with them now!” So I took my things, and downstairs there was a police car waiting for us along with a lorry that was already full of gypsies.’

On the 30th of March, the family was deported to Auschwitz-Birkenau as part of a large transport of 2,572 Austrian Sinti and Roma, where they arrived the next day. On arrival, Karl Stojka had the number ‘Z-5742’ tattooed on his left forearm. In the camp, hundreds of people lived together in overcrowded barracks, packed together on wooden beds. Among the prisoners they found their sister Kathi who had been deported to Lackenbach more than a year before. Karl was fortunate, as he got to work as a waiter in the canteen for the SS guards and was able to take some leftovers back for his family from time to time. These scraps of food made all the difference between starvation and survival. 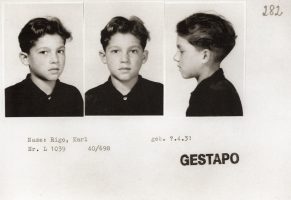 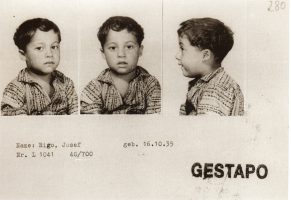 When Auschwitz-Birkenau was evacuated due to the approach of the Soviet army, Karl’s mother managed to smuggle him into the group selected for Buchenwald, although officially he was too young. Karl: ‘An uncle of mine, called Lulo, died voluntarily, although he could have saved himself. He had passed the selection, but his wife and three children had remained behind. When we started to march away, she stood at the other side of the fence, looked at him and said: “Lulo, are you going to leave us here alone?” He managed to get back inside the camp, went to stand with his family, took them by the hand and watched us as we marched off. He was a hero, but one of those nobody ever talks about.’ On the evening of 2 August 1944, the SS surrounded the Zigeunerlager at Auschwitz-Birkenau and all the remaining 2,900 prisoners were gassed. 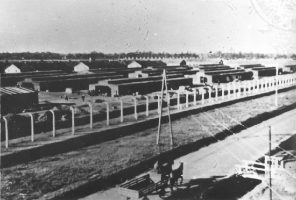 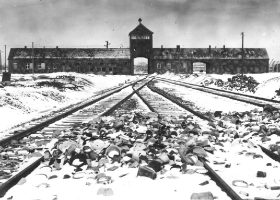 During transport, Karl’s family were separated. Karl and his brother Mongo were deported to Buchenwald, while his mother and sisters were first sent to Ravensbrück and later on to Bergen-Belsen. From Buchenwald, Karl and Mongo were transferred to the Flossenbürg concentration camp in Bavaria, where they had to work in a stone quarry. In March 1945, the Flossenbürg camp was closed down and the prisoners were forced to head south by foot on death marches. There was no food and anyone too weak to walk was shot by the SS guards. On 24 April 1945, the SS guards fled and the prisoners were liberated by American troops. During the final death march, 5,000 former prisoners of Flossenbürg died of exhaustion or by execution. 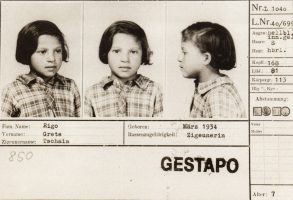 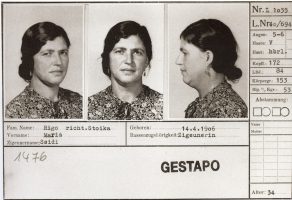 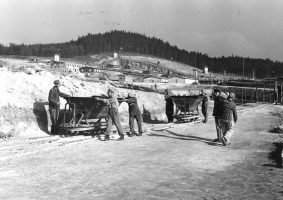 Karl and Mongo were taken in by a German farmer’s family who nursed and fed them. In 1946 they learned that their mother and three sisters had all survived and were living in Vienna. It is a miracle that Karl and his family were able to survive, given that 90 per cent of the Austrian Roma and Sinti perished in the genocide. During the following decades, Karl worked as a carpet dealer and lived with his family in Italy, Portugal and the USA. In 1985 he returned to Austria and began a successful career as a painter. In his paintings he depicted his traumatic experiences in the concentration camps. In the years that followed, Karl became an active campaigner for the recognition of the Austrian Roma and Sinti as a national minority and for the recognition and commemoration of the Roma and Sinti genocide between 1938 and 1945. Karl Stojka died at the age of 72 in April 2003.